I lost my virginity to a bee…

The inevitable finally happened.  I got a bee sting.  I don’t blame the lady who lost her life giving me a warning, it was a somewhat chaotic situation.  Truth be told, it didn’t hurt or swell.  On the other hand, you just can’t get a decent tan in a beekeeping suit… 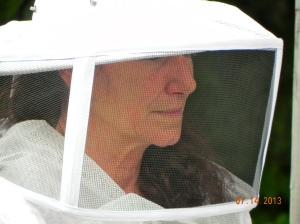 Sunday was the ITH Beekeeping Tour.  Thirteen of us met at Ray and Debbie Cilley’s Spring Pond Farm.  Prior to going into the bee yard, Debbie gave us a quick tour of her alpaca operation.  She was weighing the new newest additions.  At over twenty-seven pounds, this lovely baby is just two weeks old. 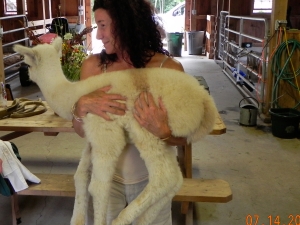 We gathered around while Jodi and Dean, our instructors from ITH, did a quick look at Ray’s five hives.  All looked well, so Jodi added more hive bodies and frames to keep them growing.  From there our caravan drove to Peterborough to visit Bernie’s two hives.  Bernie’s bees had swarmed, (left the hives) earlier this year.  He had reinstalled more bees and aside from needing a bit more room and some sugar syrup, they looked great.

Next stop was Korey and Kim’s bee yard in New Ipswich.  They started beekeeping last year.  The bee yard bordered their amazing garden and was full to overflowing with bees.  Korey had installed a queen excluder and a small super on top to begin gathering honey.  When he pulled the top off and started removing the frames of dripping honey, we all fell silent.  The frames were heavy, at least one pound of honey per frame.

Jodi declared it was time to extract the honey so the frames were set aside.

When they opened the next layer of the hive, it looked like someone had shaken a soda bottle.  Bees bubbled over the top and poured down the sides.  I have never seen so many bees.  It was amazing to watch as Kim dug into the frames and brought out more laden with sweet sticky honey.  We worked for over an hour.  I scraped old frames and prepared them to be installed.  Jodi, Kim and Korey re-ordered the hive bodies and added new frames. 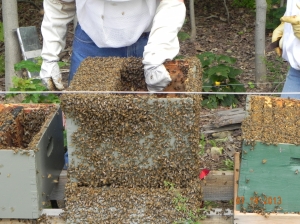 Finally, just before closing up, we scooped as many bees as we could gather back into the hive.  Even then, it was “dripping” with bees.  To help the colony readjust, Jodi took several frames and put them aside in a “NUC”.  These bees came to my house for a little vacation while the original hive settled into its expanded space.

Last stop was my hive.  I was a bit worried that the inspection would be anti-climatic after what we had just witnessed.  I started with my bees just a month ago and though healthy, the hive is unimpressive.  We set the NUC up next to my hive and opened the two small entrances.  That’s when things got exciting. 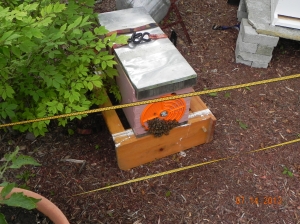 The bees scrambled out and several landed on my unprotected neck and shoulders.  I had not taken the time to put on my protective gear.  Usually, until I open the hive, the bees are placid.  I slowly walked away and carefully brushed off the “hitchhiker” bees.  As soon as I felt the sting, I also smelled ripe bananas.  When bees sting they deposit a bit of “alarm pheromone” that tells the other bees where to sting.  By removing the stinger immediately, I avoided any further incident.

Jodi took a moment to rest in the shade and gave me instructions.  I removed the top feeder which I had filled with over two gallons of sugar syrup just over a week ago.  It was bone dry.  From there I separated the frames and added new ones to the bottom box. I was really proud of the way my bees had “drawn out” comb on the empty frames. 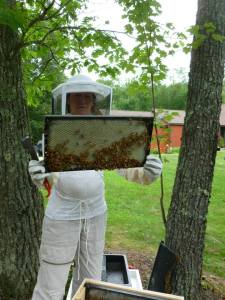 t They must have comb before they can begin to produce honey, brood, drones, nectar or even a new queen.  I switched some of the built out frames with honey and brood into my second box (hive body). New frames went in there as well.

It had been a long hot day but I was happy the report on my little colony was very positive. We all took a well deserved rest in the shade with small glasses of Mead to quench our thirst.