While the rest of the country is gearing up for Thanksgiving dinner next week, Laura is shopping, cooking and freezing; enough food for she and her husband for the next six months. The shopping usually starts at eight o’clock in the morning on a Wednesday. Wednesdays most grocers discount their meat, though I’m not sure why. For whatever reason, she made the mistake of going on Sunday afternoon this time. That’s why she is only cooking for the next six months, as opposed to the twelve months she had planned. She literal cleaned out the meat section of Market Basket.

Making the grocery list is an organizational feat in itself. Everything is listed by food group; dairy, meat, veg, canned food, pasta and “other stuff.” The list is built from the fourteen recipes she has selected.  Three grocery carts heavier, and $871.23 lighter, she lays out her menus and starts the prep work. The slicing and chopping begins on seven pounds of onions, three pounds of carrots, eight zucchini, five packages of fresh mushroom, four bundles of green onion, and three green peppers. Ten pounds of potatoes are baked, stuffed and frozen. 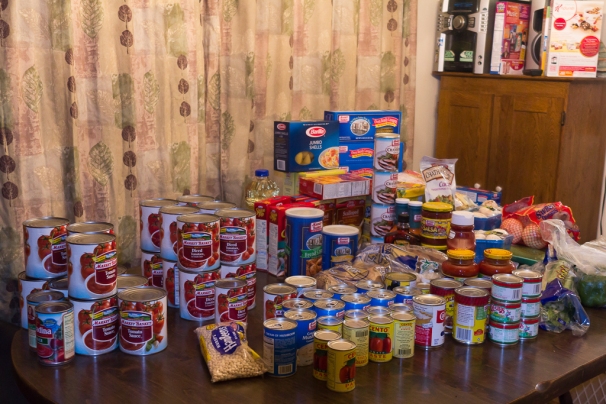 A staggering amount of meat goes into these meals, and I don’t mean that in a bad way. The sheer volume of finished food would make a homeless shelter happy for a month. Thirty-five pounds of 93% ground beef, eight pounds of ground pork, four pounds of ground veal, twenty-five pieces of boneless chicken breast, eighteen pork chops, eight steaks and twelve pounds of steak tips.

Laura works her way through each recipe which has been quadrupled. Her kitchen is perfectly set-up to allow her to move easily from the stove to the vacuum sealer to the freezer. It’s a production line of amazing efficiency. 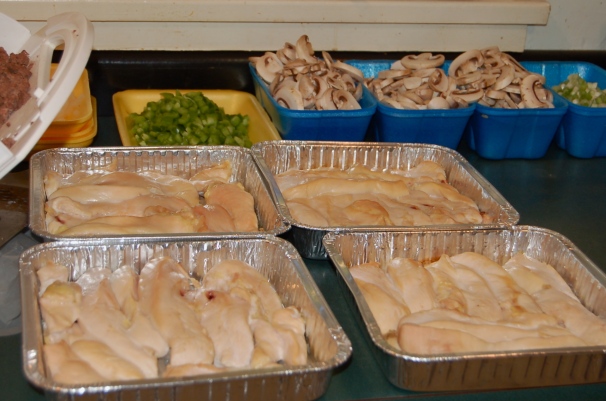 For the next three days she will work her way through all the recipes; sealing and freezing dinners.  Laura explained these will actually last longer than the estimated six months. There are just those times when you crave a lobster or something that is not in the freezer. She marks each meal with heating instructions in case she is not there to cook. I will be enjoying the Bucking Horse Meatloaf she sent home with me. The economy of it all amazed me.