Just when you think it’s safe…

I’m gearing up for our second drop-in cooking event at the store this Saturday. The theme is Eggsellent Easter Feast! This month Chef Joe Stanislaw is presenting a braised lamb entrée with a shaved asparagus salad. He’s worked up lots of ideas for deviled eggs using the flavored oils and vinegars. That inspired me to try a few of my own. Rosemary eggs disappeared almost before anyone else had a taste. The Baklouti Chili eggs with fresh thyme were spicier than I expected this time but they found a happy home at a neighbor’s.

All was going along swimmingly, as my mom used to say, when technology bit me in the butt. My poor aging laptop is 16 years old and on its second hard drive. It owes me nothing but perhaps the courtesy of not dying abruptly; which it didn’t, but I knew I was on borrowed time. I dutifully backed everything up, I think, and hauled it off to the Apple store.

I love the Apple store for people watching. Where do they find some of these folks and what drove them to seek employment in a Mall dealing with techno-twits who generally can only manage to turn the machine on and fire up Facebook??  I would never make it through the customer service side, never mind begin to understand the fixing-it role. Guess that’s why they call it a Genius Bar. I had booked my appointment online and arrived early.

Though I’m legally at the poverty level, I couldn’t help but be drawn to the array of shiny new things. The wireless speakers called to me, the snappy new wrappers and cases caught my eye like a new pair of ballet flats on sale. Finally, a blue-shirted Genius with all kinds of gear escorted me to the bar where we tried to boot up my machine. It grunted, spun and sat quietly blinking. Like an over-protective parent, I poked and wiggled it, excusing its behavior and willing it to start. “Sometimes it works if I pull out the battery and hold down this key.”

“Really?” the 20-something looked at me as if I weren’t speaking English. I saw the pity as he gave it a few more tries then suggested that even if we could get it to start, there obviously was a major failure about to occur. I couldn’t disagree. That’s when my mind went into survival mode. OK, what’s the worst case scenario to get it working? A new hard drive,  but it can’t be done here. This machine is no longer supported. Period. I have to do the job myself with parts from eBay? That’s not happening.

Next worst scenario, I don’t eat for the next month and replace it with the cheapest possible, comparable machine.  Can they pull everything over from this machine? Yes, for $99. Alright, alright, I give up. Do it now before I change my mind. I have press releases and such to finish up for the cooking demo. I can’t be without a laptop if I’m also working at the store. I excused myself to gag alone in the ladies room. When I returned, all smiles and self-assurance, the paperwork was ready.

“Thank you Ms. Schaefer, that will be one month of salads and root vegetables for you, and we will have your new machine all populated with your old stuff in 48 to 72 hours.”

“No, no, no! This is not supposed to take so long!  Please?”  “Sometimes we can have it done in 24 hours, but I can not give you any guarantee.”  Find done. I drag my empty laptop case back through the mall. I will not pass those cute little ballet flats and my thoughts of a new pair of sunglasses just became very cloudy.

I start the truck and it does its cheery little bells and whistles. One bell continued on longer than necessary. I glance at the console and it is flashing a message about needing to service the traction-infraction-reaction-something-or-other. More buttons pushed resulted in reducing it to an innocuous little yellow symbol. The truck seemed fine until I hit the blinker. It wouldn’t stay blinking. How could that be in any way related to the traction-thingy or my hard drive dying? My reaction to anything higher tech than a pencil, is to turn it off and start over.  I screech into the brake-down lane on Route 3 North, reboot, that worked perfectly for the truck.

On the bright side? It was the first weekend in April. The weather today was glorious, and life only gets better from here. 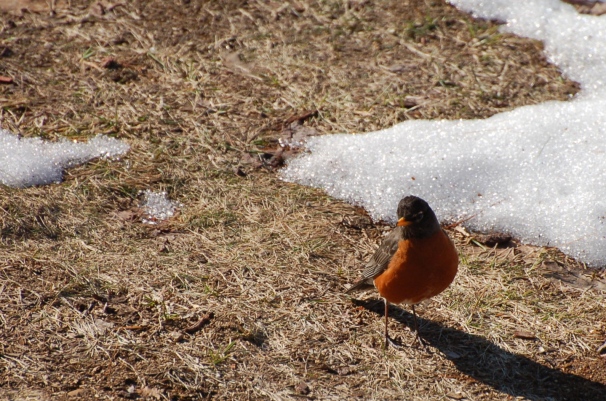 5 comments on “Just when you think it’s safe…”