On Friday I took the morning off to tour Monson, NH. The town lost its sense of being in 1770 and in truth it is one of the state’s most precious relics of an era gone. But the photos and history are better told by my cohort in crime, Laura at touringnh.com.

What I saw was the life of Monson today. A gentle man whose life is this piece of land and this history. His story is of rebuilding the house, the birthplace of life as he knows it, and all the memories he curates. With no knowledge of the Internet he has amassed a Wikipedia page of facts and artifacts. A simple man, in his 80’s, who has lost his wife and spends seven days a week her; winter in the dark and cold, summer in the glorious light and gardens. His gray, toy poodle, an unlikely consort to this New Hampshire farmer, is ever attentive to him and his right hand pocket full of dog biscuits. They spend their days being invaded by the world on a patch of earth they know intimately.

Russ and Gerie Dickerman spent their years together building and rebuilding, fundraising and waging a heroic Public Relations campaign to save this patch of his history. They  managed to spearhead a movement before crowd-funding, Indigogo and the Wold Wide Web. They raised over $350,000 and convinced the government that this should not be lost.

I could show you the maps they drew up, the curtains she sewed and stenciled by hand to adorn the remaining homestead. But the story between the lines, the story he told without knowing he was weaving it, was what caught my imagination. When she died, he discovered she left $40,000 in credit card debt. He also learned he owned lots of credit cards. Macy’s, a store he didn’t know existed, hounded him for three years after her death. The telephone solicitors called him a liar, so he stopped answering the phone. He and Nicky the poodle went to Monson, every day, all day, and no one hounded him there.

He never spoke ill of Gerie, though he did speak strongly against governor “Benny” Wentworth, and his stewardship of the colonies in the early 1700s. According to Russ, every petition the town made to the State to improve itself was denied by then Governor Wentworth who owned over 100 acres and had other plans for the hamlet. Eventually, a vote was taken to relinquish the town’s charter. The story says it was exactly split so they dragged some dying farmer to the polls. The charter was gone and the man died three days later. But as Russ pointed out, you can’t blame one man for the deeds of many.

The day we were there, dog walkers came through, the alarm was sounded by the mighty Nicky, who greeted each then ran back to Russ for approval. He reached down to scratch Nicky and said he knew them all only by their dogs’ names. They were respectful, acknowledging his work and moving on for their own private forays into the carefully laid out trails and fields. 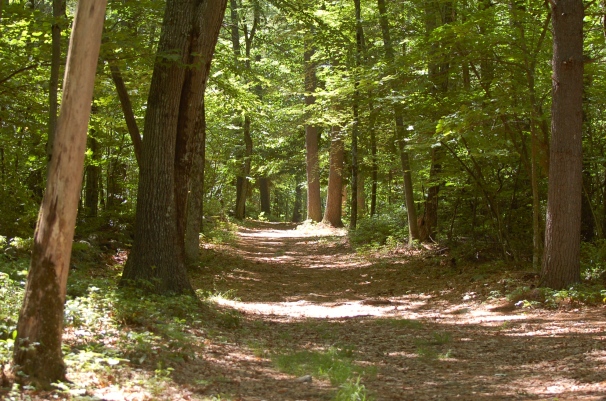 He had meant to do some gardening that day but one of the ancient water pumps needed repacking so he and Nicky were hard at work taking that apart.

Laura and I wandered off in search of photo opportunities and he went back to his chore. I wonder how many more years he will be there…