It’s Friday night and I’m organizing my herb and salt cabinet. Don’t pity me, I’m having a lovely thyme.

Once, I walked amid the rough stalls –  dilapidated tables delineating space, laden with herbs and spices I could not identify by name. Rough burlap bags and cheap plastic buckets in garish colors sorted the precious ingredients. Today, I carefully scoop and measure these blends into tins; neatly labeled they move to my sealing and pricing station. I am lost in the snatches of life and time they provoke. Warm smells of baking, the tang in the back of your throat from rich curries and chillies, the earthy scent of oregano and the tang of the flavored sea salts.

The dribs and drabs left in the bags that don’t equal a salable amount come home with me…to be explored.

Prior to working at the store I bought my spices at bargain prices from Job Lots. I had no appreciation for the difference freshness and the lack of fillers brought to the ingredients. As I tossed the old plastic jars into the recycling bin, each thud said, “You get what you pay for!”

For dinner, I dug out a store-bought cheese fondue from the pantry. Yes it was imported and better than something Kraft would market, but it wasn’t “homemade” by any stretch.  I rubbed the fondue pot with fresh-cut garlic, added the glob from the foil package that resembled cheese,  and set the double boiler to high. A dash of Kirsch, a pinch of Smoked Paprika, a few strands from my stash of Saffron (purchased years ago from an upscale grocer) rounded out the dish. I  toasted garlic bread rounds soaked in a good Extra Virgin Olive Oil. Dinner was high in dairy content…

That said, I have decided to choose a spice each month which will be the defining influence of my life.  Since March has commented the spice will be Za’atar. Starting at the end of the alphabet and working forward? This middle-eastern blend is as old as time which is a good place to begin not only my spice journey but this story.

An ancient, middle eastern herb, Za’atar is both a plant and a herb blend. The plant became nearly extinct from over harvesting in the 1970s and is protected now. The herb blend is more prevalent.  Za’atar the blend usually consists of Oregano, Basil, Thyme, Savory, dried Sumac and Sesame seeds. It is an amazingly versatile blend, lending subtle flavor to everything from pot roast to flat bread. Remnants of the herb were found in King Tutankhamun’s Tomb and Pliny the Elder mentions it in his writings. Beyond the taste, it is claimed the herb and blend is believed to make the mind alert and the body strong.  A good goal for this month. 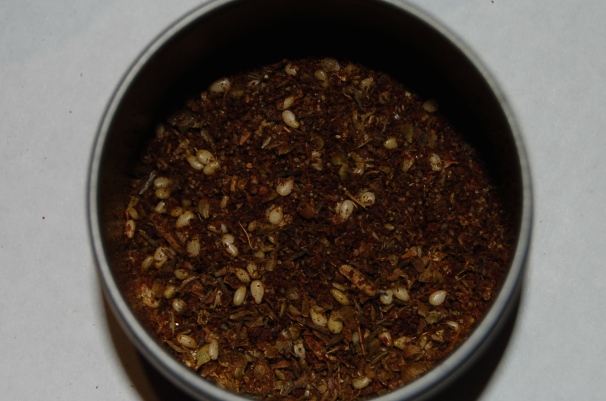 15 comments on “Spice of Life”