They busily brush past her with and air of  annoyance; as if she is merely a narrow doorway on their quest. For her part, she doesn’t seem to take this as a personal affront. She turns and trots after them, pleased to be part of the action.

Chuck and Thelma returned for the weekend. Though I had to work Saturday, we had a comfortable few days of dogdom. Hanni has a new ingredient in our never-ending search for the perfect nutritional balance to the canine diet. Small quantities of diatomaceous earth is said to provide natural parasite protection. We already feed raw food in combination with very high-quality (read – expensive) kibble, carefully screening the ingredients for such things as corn and chicken fillers. I did some research and the earth sounds harmless and potentially helpful for everyone, human’s included. It is basically the fossilized remains of diatoms, aquatic organisms. Their skeletons are silica which is abrasive and causes insects to dry out and die.

We settled in Friday night after they arrived. Thelma bedded down in the closet which would have been my last choice. It is musty from the recent humidity; the open door does little to relieve the airlessness in there. But then, Thelma is an odd dog. No one would say she is beautiful, and her past aggressive outburst leave us all a little wary of her. When she is good, she is oh-so-good, you just never know how long that is going to last.

I observed an interesting difference in how they each approach contact. Alice is not, and never has been particularly snuggly. She is overjoyed when I walk in the door and curls up happily on the end of the bed but she isn’t one to ask for much attention. Chuck thrusts his head between your knees and lodges his whole wiggly body of happiness. He will snorkel under the sheets or spoon you all night if allowed. Thelma is somewhere in the middle. More than once I have jumped at the sudden, silent cool nose that touches me from behind, or the fleeting lick of my knees as I stand at the stove.

Mealtime brings everyone to the kitchen as I prepare their twice daily rations. The sound of kibble in handmade ceramic bowls can be detected from the far corners of the yard; or maybe their internal clocks are very accurate. Thelma sits, Alice dances and chatters in Chinese, Chuck settles on the dog bed in the dining room where I will place his bowl before him and he will take his meal lying down.

Chuck waits for his dinner delivery

So far, the diatomaceous earth is not a big hit. “Come on guys! Eat your dirt!” I have disguised it below a raw egg. Inhaling it is not recommended so it would appear the egg serves to dampen it as well. Regardless, the bowls always have a slightly slimy covering when the food disappears. 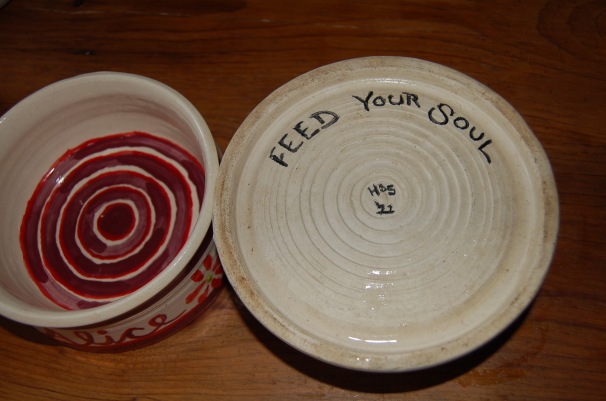 9 comments on “Feed your Soul”