She was born on the 4th of July. Wilson’s mother, Mary Agnes died today. He bent and wet her lips with a sponge, then told her he loved her and it was OK to go now if she wanted. She was gone an hour later. It wasn’t “unexpected” but the reality is always stronger than the imagining.

I met her a few years ago. We shared our maiden names and initials, MAW; mine – Martha Anne Walsh. I was “the Walsh girl” before she knew me well. She often asked Wilson “How is that other Walsh girl?”  We both added the letter “K” to our names with marriage, mine just didn’t stick. On her 85th birthday,  (when, coincidently, I was 58) all she wanted was to sit by a brook with her bare feet in the water. Wilson, his daughter, and I packed her into the car and drove to a remote bridge over a gushing golden stream. We guided her down the embankment to a flat rock in the sun where she could sit and dangle her toes. It was a hot, humid day. Wilson’s daughter and I slid over mossy rocks to the deep pool in the middle. Mary delighted in our antics and the chill of the stream. Wilson was embarrassed and outraged over his mom’s attire and lack of decorum. She had on an oversized T-shirt and her granny panties.  “Who am I trying to impress!” she barked at him. 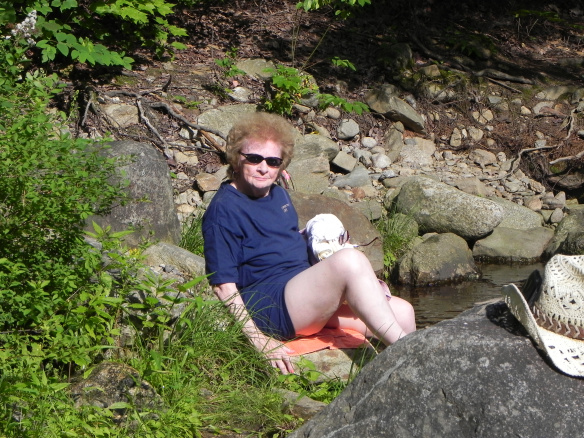 Through her decline, he fought to stave off the end. For many months she accompanied him everywhere, sleeping in his cabin at night, going on odd jobs with him during the day. She was always treated with the utmost respect from folks whose paths they crossed. And she was with her son, who appeared for all the world, happy to have her along. (Elder Care 101 and Uncommon Acts of Kindness chronicle some of their exploits)  Many nights we all dined on the back deck while she was still able. When I asked how her day had been, she would say, “Tommy takes care of everything, I don’t have to do a thing and it is always interesting.” Like the time he took her fishing and impaled his right hand with a rusty hook. Being on blood thinners, this spelled disaster and he bellowed and shook the neighborhood. She took it all in stride. “He’s a good boy, just easily upset.”

Of the eighty-odd years before we met, I know very little. She raised two boys and two girls, one followed her footsteps into nursing. Wilson says she always worked, earning two masters degrees and culminating her career as the head of nursing in a local hospital. For all that Wilson’s memories depict a strict and anti-feminist father, Malcolm must have been the only love of her life. “Oh he could be a fool but what man isn’t?”

My favorite Mary story was when an illness briefly sent her to a nursing home.  I had given her a signed copy of my book that she cherished and reread. If it was missing from her bedside table she would demand, “Where is Martha’s book?” She had a devoted Springer Spaniel named Martha and most folks thought she was crazy, telling her the dog never wrote a book. She was far from crazy.

This may seem like a strange eulogy for a woman who lived 87 years of which I knew her only a few. Life doesn’t always hand you all the facts about a person, and those you know may be random connections, but they matter nonetheless.

Rest in peace Mary Agnes. You are missed.