Forget the Red Hat clubs and the “When I Am An Old Woman I Will Wear Purple.”  When I declare I am old I will wear chocolate pearls.

Alice looks at me expectantly like this proclamation might bring food? She queries me, “Is there something in this for me!  (besides my tireless search of threats to our peace in the form of gray squirrels?)”  I dig out her crusty ears, apologising profusely for the indignity, count myself lucky that she is docile and doesn’t threaten to rip my arm off. Such is the glamorous life I lead.

I have accumulated jewels of many forms, from folded paper love notes crafted by children who spelled phonetically, to real hardware in the sense of bijoux. I’ve always been one of those women who dons a piece of bling and it becomes my signature for years because I never take it off. Early photos in my twenties display a twisted sterling bangle – every photo for a decade. One of my current favorites is a ring I bought in Northern Arizona on a trip to visit my sister. Our joyous mood tempted us to reward ourselves a little more liberally than our budgets allowed. I bought a ring in honor of my recent divorce. It is my “DisEngagement” ring. The ritual of an engagement ring before setting off on a new, married life, prompted me to buy a symbol of my newly disengaged life. Today, many years later this ring garners comments on its unique design. They smile when I tell them it is my disengagement ring and give a brief explanation. I can’t tell you how many elderly wives turn to their spouses and say, “I want one of those!” Only one husband has been quick enough to remover and ask if my former husband “paid for that one too?”

Ah the daily rituals of being over half a century. I am counting down the weeks to 60 years on this earth and there are certain truths I have begun to accept. The love of a dog is like no other, a night out with a girlfriend, (who may be slightly behind me in years) is good for the soul and reaffirms my belief that there is life after stages such as hands-on motherhood and marriage. I would also included the belief that the next generation we brought into being, will carry on this simple goodness. The goddesses and gods we have created will take on the mantle.

Like every generation before me I need to step back at some point and honor my children as the adults they have become. Words that struck me recently were uttered by Joe Biden, “A father knows he’s a success when he turns and looks at his son or daughter and knows that they turned out better than he did. I’m a success; I’m a hell of a success…”

As to the choice of jewelry?  What is more elegant and satisfying than chocolate or pearls? The marriage of the two.

Rather than wear purple or a red hat, rather than join a society, I choose to follow the current path and wear chocolate pearls as my badge for making it through sixty years of learning. 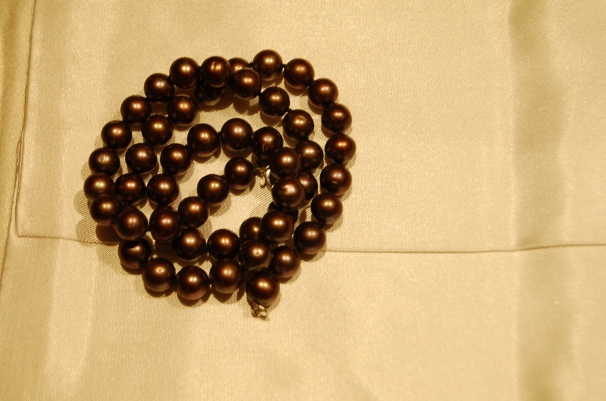