Sunday is my day of leisure. Once the weekly chores of food shopping, dump run and such are done, I have a day to sit back and reflect on the week just passed. It is usually a solitary day, with time spent in my head to balance the small social whirl the other six days bring.

There were visitors at the farm. I walking in to the kitchen to relieve the farm manager who stays overnight with Gunther on Friday. He was finishing his tea at the sink, his loyal sheep dog, Sheba sat by the back door. Exotic Genevieve was flitting from the stove to the fridge and Gunther was sitting before the door, watching the birds and stoking Sheba’s head. Genevieve (she pronounced it Jon vi air)  told me she was from Haiti originally. Her flawless, blue-black skin draped with bright, flowery cotton and her warm Caribbean voice drew me in instantly as she flitted about the kitchen. She was visiting to attend some courses nearby and had settled into the farm with ease.

Later Christoph sauntered in. He reminded me of a jolly garden gnome with the wisdom of a prophet. At 71, he splits his time between his  lovely wife Martha and their home in Amsterdam, and the apartment he rents near his work in Germany. Though he travels extensively, four annual treks to China and India, his boyish exuberance for our small corner of America had him babbling with delight. Elise had taken him on her errands. He was amazed at the hardware store, “So many choices of hoses and things for the garden!”

“Wait, didn’t you go to County Stores? That’s a little ‘mom and pop’ family owned shop?!” I tried to explain it was tiny in comparison to the big box giant meg-stores down the road.

“But the groceria! So many choices! And then we stopped at the most marvelous farm stand where this Dill was in the ground just a few hours ago!!”

He was fascinating because he was fascinated. I loved sitting and listening to him. He spoke with Gunther in German which brought an ease and a smile to my old friend. Every so often he would stop the conversation and switch to English to include me. His questions about everyday life were simple yet he listened with total rapture.

It was a day flooded with unexpected intercourse and discovery. Sunday, as I loaded my kayak onto the top of the car and set out for a solitary afternoon on the lake, the voice in my head was reviewing all the conversations of the week. All the concepts and notions I had shared bubbled along coursing like a swollen river. Later, drifting with the wind, watching blue dragon flies mate and hearing the red-winged blackbirds sing in the reeds, it occurred to me I had not seen a single soul face-to-face or spoken with anyone on the phone all day. I was in a communication drought and yet, I didn’t feel parched for thoughts or words. 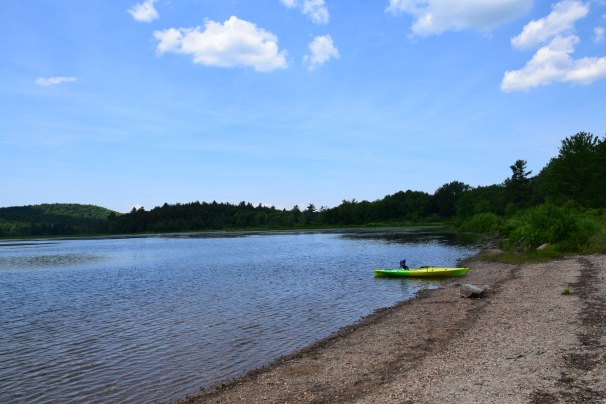 8 comments on “Flood and Drought”