There is no question that the season is changing. A funny thing about Fall in New Hampshire is the juxtaposition of death and renewing sleep. If, on the one hand, you look for death, it is all around you.  The gardens of abundance die off and the harvest is waning; whether it is flowers, fruit or vegetables. The leaves are changing and the insects are disappearing. Even the sounds of cicadas and tree frogs are silenced.

It can also be viewed as renewal, in the coming period of hibernation and the frenzy to collect up all that is good prior to the sleep.  The deer and moose are entering the rut. They will run furiously and unconsciously toward sex and sleep. The males are beyond thinking reasonably about life and survival, the females are thinking purely of the laws of nature and selective survival of the species.

What does this have to do with bees? They too are drawn by thousands of years of instinct to behave a certain way to survive the coming dearth. This week I saw a cleansing of sorts that prompted me to contact my bee-mentor, Jodi.  I walked out one day to find hundreds, no really HUNDREDS, of dead bees, stacked on the bark mulch, outside the hive. 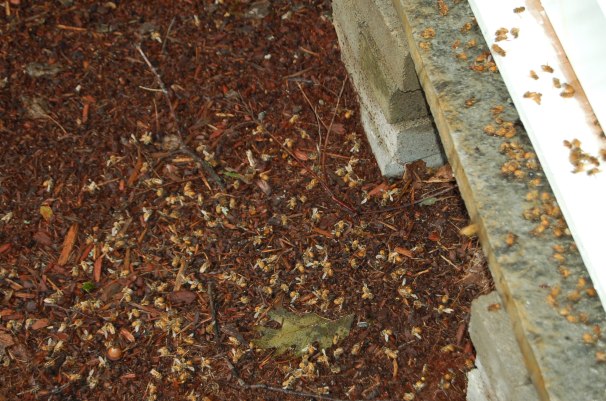 I immediately emailed Jodi in a panic and bit my nails all morning.  She emailed back asking if they were lying on their back shivering.  No, all dead. She suggested they had gotten into some pesticide from a neighbor spraying their garden or roses and thought things were probably going to be OK.  The next day, there were several pupae-stage bees on the landing board.  People, I don’t expect you be to interested or excited about the minutia of what I am describing.  Here are the “CliffsNotes.”  The bees begin to feel the change in seasons. The recognize that if the hive is to survive the upcoming winter it most be able to sustain only the most important members. That would be the queen, to continue to lay eggs so the workers can survive, enough stores of honey to sustain the queen, the new workers and the current works. So who is superfluous? The drones. The male bees whose entire job in life is to fertilize the queen.  Queen is all set for the moment, you guys are eating too much.  Good-bye.

So we come to the class and what was learned about helping the bees Winterize. The hive inspection this time of year involves looking for good stores of honey and brood. 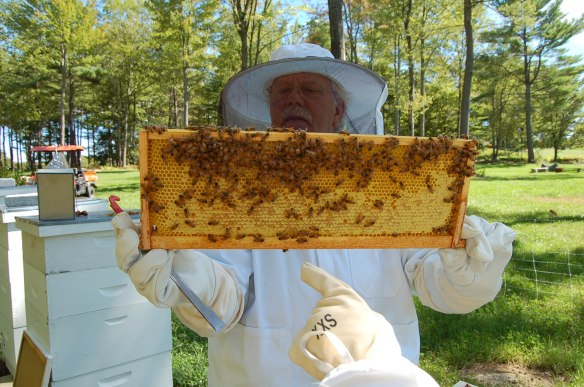 Lots of capped and uncapped honey!

Beyond that, we look for evidence of mice, who are drawn to the warmth of the hive. Bees will sting the intruder to death, then wrap it in propolis, the sticky substance they produce to repair holes in the frames. The body is mummified and harmless but lots of bees die in the process and precious space is lost to the mummy, better to put mouse guards in place before this happens.

Insulating boards are put in place on top of the hives, under the outside cover. A black plastic insulated wrap is slid over the hive to keep the winds at bay and help the hive maintain its 90° core temperature.

Finally, and best of all, if the hive has been very productive, honey can be taken and extracted from the frames. Sunday, my bee class enjoyed the fruits of one hive’s labor. We used an electric hot-knife to removed the caps on the honey comb. The frames were then inserted into an extractor which uses centrifical force to spin the honey out of the frames. These frames can then be returned to the hive. The bees will clean and reuse the comb. Four frames produced five and a half pounds of honey! 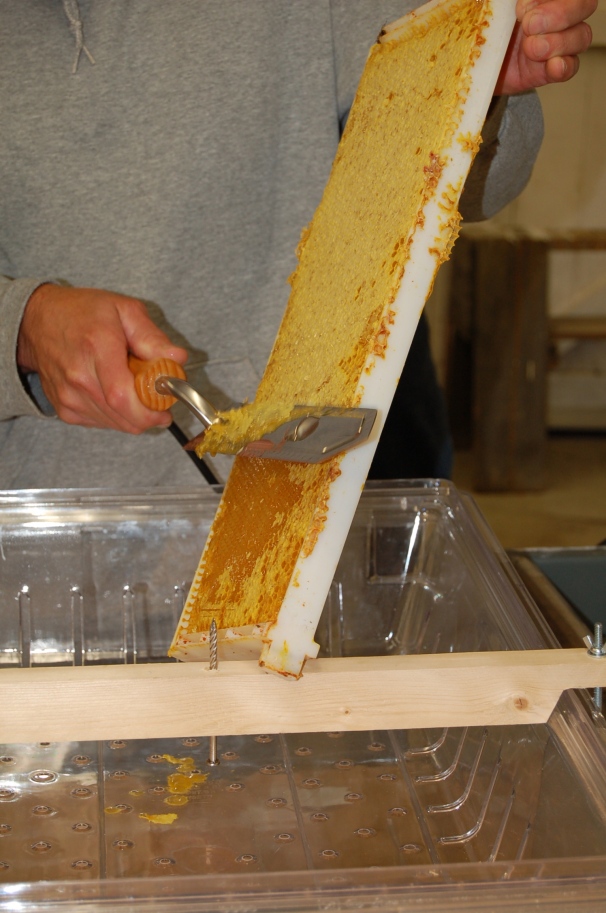 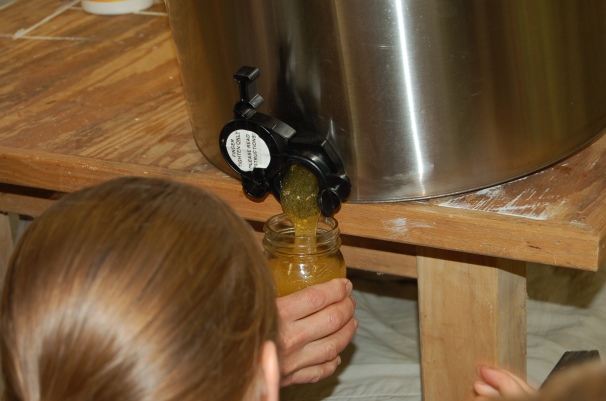