The woodpecker raps out a complaint;  the suet feed is empty.  One of my bees, MY BEES, oh my!  Well, OK, it was a honeybee of unknown ownership that just joined the Monarch Butterfly on the wildflower.
My office for this season is very different, wonderfully different.  Gone are my wall of glass and dark paneled ceiling.  The sky and clouds now serve as my ceiling and nothing separates me from nature here on my back deck.
I have also been noticing how another part of my routine differs greatly from the winter adventures.  My ride this weekend with Hanni and Lauren was an epic example of contrast to my long winter of chilled and slippery fun.
I had not been on Duetz since our fall.  At twenty-five, Duetz is not old for a horse, particularly a horse who has never seen abuse or ill care.  Two bouts with Lyme disease, however, have begun to take its toll.  I thought it was a nervous system issue with her right front; doesn’t really matter what the diagnosis was, she had been stumbling on recent rides.
The last time I went out with Duetz, Lauren was on her mare Blessing, and Abby rode Night for me.  It’s always such a thrill to me to see someone else on my “fast” partner, but they better like spicy mares.  We purposely chose a long dirt road trail ride so the footing wouldn’t challenge Duetz.  Though she stumbled a few times at the walk; at the trot or canter she was fine.  A half a mile from home, coming down a slight slope into a corner of the road I felt her leg give out.  The slow-motion-it happened-so-fast tape unwound in my mind.  She landed on her right side, momentarily pinning my leg.  As she scrambled back upright, I gazed at her white knees and watched as they bloomed red with blood.
“You have no insurance so you are just fine,” was the first thing that came to mind as I stood and shook myself off.  Abby and Lauren took over.  Abby rode back to the barn to find the truck, trailer and Heather if necessary.  Once we determined Duetz could walk and I was mobile, Lauren and I called off the rescue party, and started for home on foot.  Heather and Abby caught up to us at the end of the road.  I gratefully took a ride back to the barn with Heather in the truck,  while Abby walked Duetz the rest of the way.
More than any physical pain of falling, I was afraid this meant the end of riding Ms. Duetz.  I knew I had to get her back out again.  Perhaps a rougher trail would keep her mind engaged and focused on where she was putting her feet.  So, when Hanni agreed to be “staff photographer” bareback on Night, Lauren and I tacked up Blessing and Duetz.
It’s not that we weren’t having fun, but most of these smiles are because of Hanni, turned completely backwards-shooting photos, as Night happily marched along as lead pony. 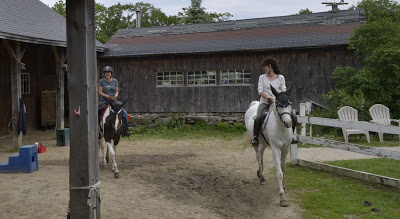 The Mountain Laurel is in bloom. 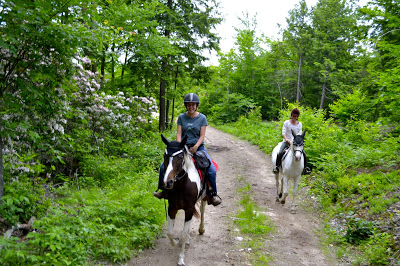 The ferns are so lush, entire trails are hidden.  Because of all the rain, there are some streams to cross but for the most part the footing was just challengingly rocky.  The views from the shoulder of the mountain have always been some of my favorite.  In winter you can see  Wachusett Mountain Ski Area in Massachusetts clearly.  This wet spring, however has meant the land cleared two years ago is now thriving with new growth. 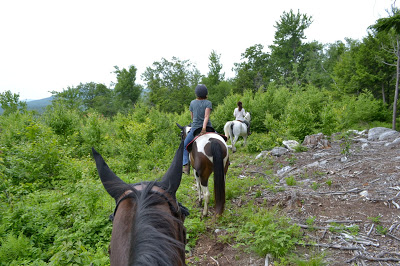 We cantered up a hill, forded a stream, and crossed over to the western end of the trails. 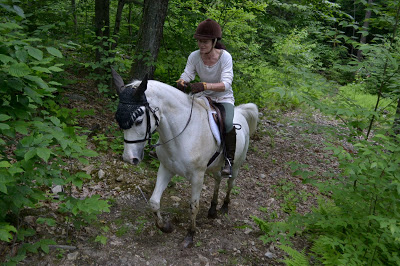 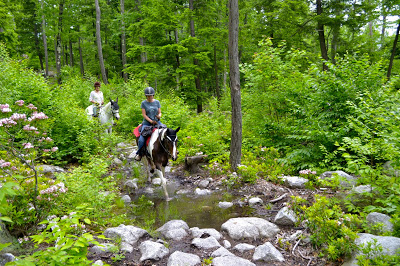 Nighty needed a “green grass gallop” by then, having been the model pack pony while Hanni shot photos backward the whole way.  I took the camera and did my best to catch them as they flew by. 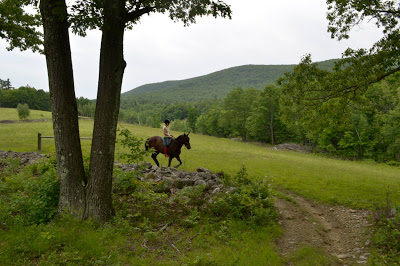 Duetz never took a misstep.  We got our confidence back!

7 comments on “The Green Grass Gallop”