On my to do list was to meet George Iselin, my farrier. George shoes a number of horses at the barn and I usually hang around to hold horses for owners who can’t be there. It’s a pleasant way to spend a couple of hours and catch up on local happenings. I got to thinking as I watched George calmly work his way through many hooves, how much like a pedicure or manicure, his job is. Except it was 28° this morning.

First the old shoe is removed, think polish removal for a mani/pedi. In this case, the “polish” is several ounces of iron that has pounded the earth, rocks and roots of the trail, and stood around in fresh manure. George loosened the old nails from the outside with a hammer and chisel-like tool. Nippers pry the shoe from the hoof and remove the used nails.

Yuck! Walk in for a pedicure with toes like this and you’ll be shown the door.

Once the polish is off, or shoe in this case, the trimming and filing takes place. A sharp knife cuts away the growth on the sole; a rasp smooths and shapes the surface. Think trimming, filing, buffing and cuticle care. 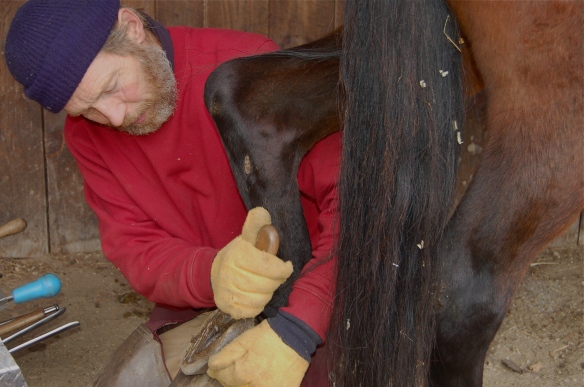 That knife is really sharp

At last, your lovely nails are primed for the polish, or shoe if you are a 1200 pound client of George’s.

I’m not even going to try to describe, for the squeamish among us, the smell. I happen to think it isn’t bad; hoof trimmings have a smokey aroma with a slightly earthy finish. The barnyard dogs sit impatiently waiting for a scrap to fly their way, so the trimmings are obviously tasty as well!

Finally, apply several coats of polish or several nails. No, this does not hurt anymore than cutting your fingernails hurts. The nails are driven on an angle with the long ends nipped off then filed to prevent sharp edges or snags. It also helps them “clinch,” keeping the shoes tightly attached. Since winter is on its way, I chose a “polish” that included small studs that will help NightMare’s traction should we get any slippery snow or ice. A good mani/pedi like this will last 6 to 8 weeks. I wish I could say the same for the human version.