I had high hopes of spending Super Bowl Sunday in the woods, far from the crowds of rabid fans and the roar of televisions. The gods of weather had a different plan. For the first time in weeks we are enjoying temperatures above the freezing mark but the clouds rolled in, obscuring my mountain views and bringing a light rain.

Every living being is exhibiting the effects of stir-crazy, cabin-fever, mid-winter behavior. The cats routinely roll up the corners of the living room rug, Alice races through the house crashing into tables and door jambs. The horses are just shy of dangerous in their exuberance to let loose and kick up their heels. I have done my best to get Night out for some exercise, even if it is just to run free in the indoor arena. My promises to Alice, for a run in the woods, have all dead-ended with the wind chill dropping the air temp to negative digits.

Today was warm and even though it was rainy, I loaded Alice into the truck and drove to the other side of my mountain. The trail leads to a fifty acre clear-cut blueberry patch on top of this shoulder of the Wapac Trail. We hiked up the slippery trail past frozen streams just beginning to thaw and gurgle below the surface. I’m not a hiker, not even a fan. I’d rather get to the top of the hill on a horse and be sitting just that much higher above the tree line. Since that wasn’t an option today, I climbed and climbed, thinking to myself, “This will be so much easier on the way down.”

For my fellow blogger Alan at NH Garden Solutions

At the top, I stood and turned 360°. The hills were laid out below, me dotted with open fields that still held some snow. One of my local Ravens swooped by, then called to me from atop an ancient Pine. A dark flash at the edge of the field caught Alice’s attention, as a Buck bounded along the stone wall. Otherwise it was silent and still. 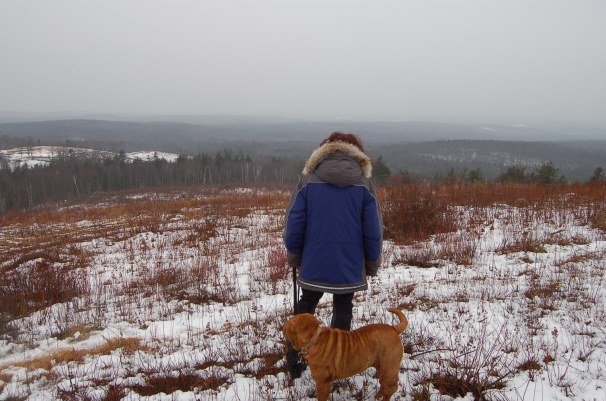 The way down, however was steeper and slicker than I had expected. We skidded down the slope that turned almost vertical in places. I grabbed for tree limbs only to have them snap off in my hand. Deer tracks crisscrossed our trail and I thought, yes, hooves would be best for this footing.

As I sit writing this, Alice is curled on my feet below the desk. Her unusual, but constant, body odor is not enhanced by the dampness of her coat. She snores peacefully, utterly still and content.

“Did you sing the Doggie Dinner song?”

7 comments on “Being Still”