I don’t think of myself as one of those obsessive pet owners who are regularly mocked in The New Yorker. I don’t think of myself as a “parent” to them, though I recognize the important part they play in my happiness and can not imagine  life without the companionship of my animals. PETA is too radical for me though I do believe in fair treatment and am a serial rescuer. My introduction to the world of Doggie Day Care was carefully considered from both a financial and an intellectual standpoint.

If you follow my posts, you know I recently performed  the most humane act a pet owner can bestow and said good-bye to three of my pets. With two beings remaining, there is a lot more of me to go around. It has been a long, deep winter and we have become very attuned to each other’s rhythms. While I staunchly avoid humanizing them, Alice and Skeedles do help to keep me sane. The lack of “pack” has brought their peculiar traits to the forefront. I noticed Alice put up more of a fuss when I left for work and she seemed listless. In the summer the back door stays open and she has her fenced acre of woodlands, birds and neighborhood happenings, not to mention the occasional squirrel to occupy her. Winter days of being locked in the house, regardless of how roomy, was obviously not a lot of fun.

Her first visit to day care was terrifying for both of us. At the door, she cowered between my legs and the staff took her into a quieter area to become acclimated.  Like a preschooler’s parent, I called mid-way through the day to check on her and arrived promptly after work to pick her up. They reassured me she did fine with the swirling pack I threw her into for eight hours. She came home, ate and was so tired she barely got up for two days. The kennel suggested she would adjust better if I could bring her for several days a week. At $15 a day I was scrounging to give her one day out.

After a couple of weeks she hopped out of the car and joined the din happily. Her tail was up and she was strutting around to greet her fellow canines. Proud parent that I am, I was thrilled to hear she was “high up in the pack” and the staff loved her because just looking at her made them laugh. She is a strange little being.

It would appear she has her favorites. She and a large, reddish Bloodhound share the sunny window seat, I’m told. Ms. Bloodhound doesn’t tolerate anyone else on her throne, so I’m proud she gets a nod from the “popular kids”. She is impatient with the puppies and has a special play-bow for the massive, drooling Newfoundland. (He is a gorgeous giant!). Dogs are pack animals just as horses need a herd. I rationalize the expense as her mental health day with exercise. 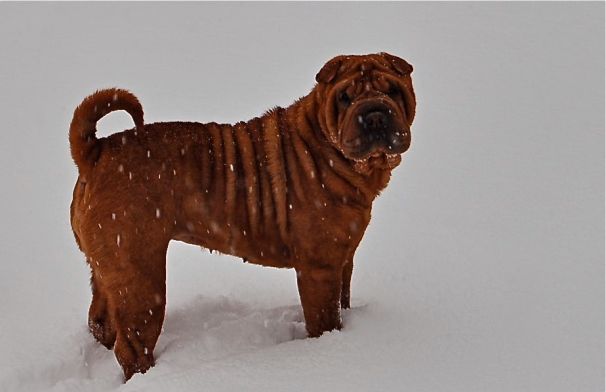