I almost made a very expensive mistake today. But first, let me give you a little history. Growing up we always had Electrolux vacuum cleaners. If you are old enough, you will remember those chrome and light blue canisters on sled runners that refused to glide through your home. They were noisy and heavy and could suck up a small child if it came too close.

In late 1977 I was living in Olney, IL. We rented a sad old house with wall-to-wall, indoor-outdoor carpeting throughout. In case you’re not old enough, this invention in the flooring industry was a precursor to Astroturf I think. It was always a muddy shade of brown or red, and had the texture of the softer side of velcro. A traveling vacuum cleaner salesman made it in the front door with the promise of  a “no obligation” cleaning. His shpeel was so good. He said he was paid on how many calls he made so it didn’t matter if I bought or not. That old carpet was foul and he not only cleaned it to a frightening new shade of brown, he went to far as to pick up a series of balls; starting with a tennis ball and ending with a bowling ball. So fantastical was this machine, I just knew I had to have it.

The price was astronomical, so far out of our reach at that point I flat-out laughed at him. He stayed, he persisted, cheaper models, there were payment plans. After four hours I was the proud owner of sleek, gray model. I promptly went to work at McDonald’s to meet the monthly payments. That particular model somehow made it into the wrong shipment and followed me to Trinidad where it fetched a pretty penny when we left.

From that point on, I lived in situations where I didn’t need a vacuum. I had household help for the next several years. When I finally settled back in The States, part of my divorce agreement included a brand new Electrolux.

Skip ahead to the farm in Lunenburg, MA. The house was so massive, (19 rooms not counting baths) so we purchased a second machine.   If I remember correctly, I paid $2500 for the latest model and it is a rock. Today this vacuum is 15 years old. I was running low on bags the other day and coincidentally Electrolux called and said I was due for a service update. I explained I only needed bags. No problem, Joe would be in the area and would drop some off. We set a time and I went on with life.

When I got home today, a white van followed me up the drive. The Electrolux salesman was an hour early. He was sporting a cast on his right arm from his finger-tips to his elbow. He brought in a large duffel bag, unpacked a huge air testing machine and other odd gadgets. First, he went over my machine, noted it had some rust inside, and proceeded to test the air quality coming out of the filter. Then he ran the vacuum over my favorite carpet in the living room. “Now I want to run one more test.” he threw over his shoulder while heading out to his van. He came back hauling a huge box and started unpacking the Maserati of all machines. Sleek black and burnished chrome. He placed a small black cloth over the opening of the bag in the new machine and went back over the area he had just vacuumed with my machine. When the cloth was removed, it was caked with a petri dish mass of hair and sand. My machine was obviously toast. Well 15 years isn’t too bad for a $2500 investment in cleanliness, but I can no more spend that kind of money than I could go out and buy a new house.

I helped him pack up the box, since his injury meant we would be there all night if I didn’t. I shook my head slowly to the offers of lesser models and payment plans. I carried the gleaming machine back out to his van.

Then, I kicked myself. I ran back in, shook out one of his magic cloths, inserted in into my workhorse and turned it on. OK, so first I noticed the power was on low, then when I started to vacuum it instantly shut down and flashed its “BAG FULL” light. The black cloth was just as full as it had been with his model. I smelled a rat.

When I went online I discovered the Electrolux site didn’t even have this model. My online chat produced this: 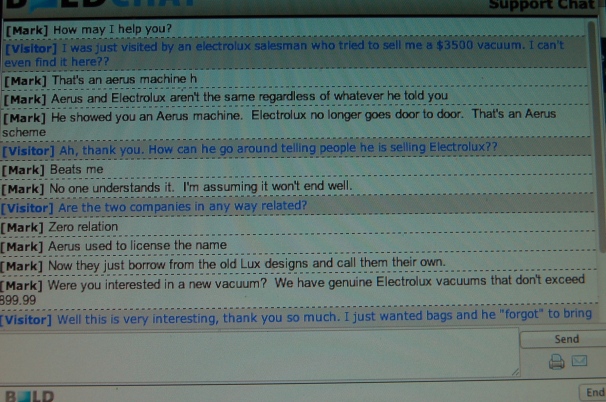 More online sleuthing just muddied the waters. The Aerus site claims they have made Electrolux vacuums since 1924. Have I been vacuuming in the dark all these years?

13 comments on “Vacuuming in the dark”