My fingers are soaking in a coffee cup to try to loosen the Super Glue that squirted everywhere, I need to rethink how to attack this puzzle.

It’s a fine day for an indoor project. The wind is howling though the sun is bright. Factoring the wind-chill we are in the negative double digits here, not fit for man nor beast. A good project off the bucket-list seemed in order.

Picu is from Bali. I bought him to join my other artifacts and puppets from Indonesia. Puppets figure really large in mythology and life there. It’s wonderful way to entertain and pass on life’s lessons. (With no commercials)

I don’t think Picu was ever destined to be anything more than a toy or souvenir. Though I have looked, I have not found a reference to either a great hero or a villan in Balinese culture that involved a rooster.

He was proudly displayed by a shopkeeper on the road to Kuta Beach. His rickety, lean-to stand was a riot of colors and feathers, as the puppets danced in the breeze. There are just some possessions you never knew you needed in life until they are right in front of you. He weathered the trip back to America and hung happily collecting dust in several homes. When I bought this house I noticed his garish colors had begun to fade so I put him in a corner of my bath room hanging over the tub. As time went on, his lustrous feathers began to fade and fall out. My neighbor, Wilson, offered to take him to his house and replace the feathers with some from his resident chicken.

That was the last I saw of Picu for almost a year. In the beginning I asked often how the project was coming along. Wilson’s answers were vague and inconclusive. After the winter, I demanded visitation rights at the very least. Wilson sheepishly admitted he had hung Picu on his porch and sometime last Fall he had disappeared. Wilson’s porch is not for the faint of heart. I picked a relatively warm, dry day and braved the serpents, mice and whatever else live under there to poke around looking for Picu. I couldn’t believe we had come this far in life and he could vanish. There he was, covered in mud and crushed beneath a log. His toes were broken and his feathers were matted.

I couldn’t bring myself to photograph him in his disgusting state. A pan of warm soapy water and a toothbrush brought back his cartoonish colors and markings. Unfortunately, his feathers didn’t wash or wear well. 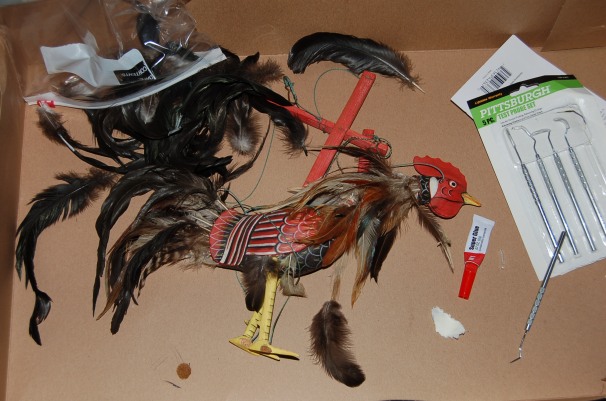 Today I put Hang Massive on the stereo and channeled my inner Balinese puppet-master. Hence the concern about having been unprepared for this project at the beginning of the post. My daughter sent me a bag of feathers from her farmyard. Armed with dental picks and super glue, I started, thinking “If I get a few feathers in I will be inspired to continue until he is glorious again!”

I’m learning about feathers, and how to carefully drill out the old quills so I can replace them. At times I think this must be what it is like to be a dental hygenist, poking and prodding away the crusty stuff. I have no idea what the original artist used for glue, some sort of permanent pine-tar stuff that defies all removal. I can’t imagine he had an electric dremel or other such advanced tool. So, much to Picu’s horror, I have him standing on his head while I dig out each individual hole and make room for his new plumage…

Did I mention I am the least “crafty” person you will ever meet??

the world one step at a time