The Cousins were here for the weekend. For those new to my blog, my daughter has three dogs who are considered ‘the cousins’ to my Alice. A year ago, when Hanni moved back to the East Coast after a 6 year hiatus in Northern California, she stayed with me for about 6 weeks. Our quiet, down-right boring, little household swelled with two additional dogs. Hanni’s partner, B arrived with Gaia, the crazy husky and we all found our way from there.

Charlie, Hanni’s pitty mix has made so many car trips across the country in his short life; I lost track at a dozen. Thelma is a more recent addition, about five years ago she joined the gypsy pack, trek back and forth. Thelma has been described as a Heeler of some sort. She has become a lovely loyal lady with some occasional hygiene issues. Here was my thoughts on her a year ago.

So here we were a year later. Hanni, B., and Gaia went away for the weekend and I had the ‘old’ dogs. If Alice appears to trot everywhere on her tippy-toes, Charlie dances like Fred Astaire right down to his tuxedo and tap-shoes with spats. Thelma tends to scoot or lie down. Energy is never wasted on appearances with her. The weather was perfect for a three-day weekend to celebrate the 4th of July. If you were one for picnics, hiking, bar-b-cues or fireworks, you were in luck. I brought Thelma and Chuck home after work on Friday. There were thunderstorms predicted for the evening, and while I love me a good old rumbling light show by nature, Charlie starts to pant when the barometer shifts. We do however agree on our total abhorrence of fireworks.

I put on some calming music and we settled in for the night. I had tried to distract Charlie before bed by asking, “Find a Ball Charlie!” and though he searched the house and the underbrush of the yard, he repeatedly came back with rocks. “Oh that is just sad, Charlie.” I vowed to buy him some tennis balls on Sunday. When I came home from a 12 hour shift at the farm Saturday night, my bed looked like a rumpled nest. The pillows were strewn on the floor and the duvet was swirled into a heap. As I grabbed a corner to shake it straight, three rocks flew up. “OK, you need a ball, I get that.”

Sunday dawned cool with a promise of heat and sun. I set off to do errands early. Alice usually accompanies me. The dump was closed and I was afraid she would be too hot as the morning passed so it wasn’t our usual routine. When I returned, the bed was smooth and I had a brand new “Chuckit!’ with spare tennis balls.

I made us all wait, the pristine orange of the toy taunting the dogs as I unpacked groceries stowed away provisions for the week. Then we opened the packaging and headed into the yard. A frenzy erupted as I gestured with the Chuckit, getting a feel for my swing. I let loose the first ball and three bodies exploded down over the ledge in pursuit. Then I watched the ball sail over the fence into the dense forest. Three faces turned upward at me. “WTF?!” only more politely in dog-language – “Seriously??!”

The second toss was better aimed NOT to go down over the hill. Charlie caught it on the third bounce but lost it to Thelma who scooted off to the sand, dropping it and promptly peeing on it. Charlie sniffed, peed off to the side and looked at me sorrowfully. I retrieved it and scratched it around in the sand hoping to dry it and disguise the mistake. A few more tosses and Charlie purposefully trotted into the house with it. For the rest of the day, it was his; between his paws, under him, in his mouth. Can’t say I blame him for not wanting to share… 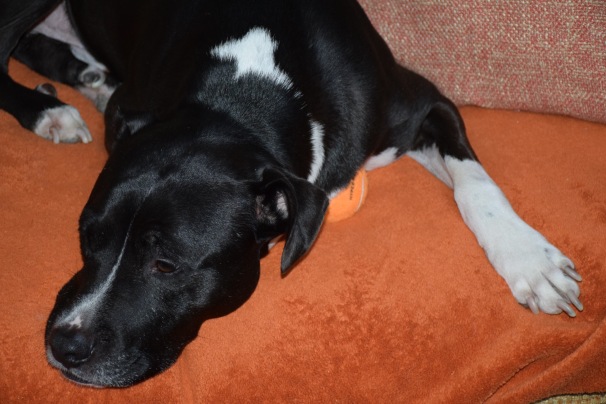