The last time I opened the hive was two weeks ago during the annual Hive Inspection.  At that time I rearranged some of the original frames, mixing them in with another hive body so each box had some frames already full of brood and honey and some empty frames to build on.  At the time, it looked like we might be able to add a third layer – the Super – for just honey.

I wanted to go with traditional wood and wax frames.  My starter kit hive came with black plastic frames which, though the bees don’t seem to notice, just don’t have that real bee hive look.  For the smaller Super, I decided to build my own frames from pre-cut pieces and use wax foundation.  The Super holds ten frames, just like my other two boxes. The wooden frames were partly assembled.  I had to crack out the hive tool to pry off the small piece of wood that holds the wax in place and then nail the bottom rail back on.  The wax foundations are so delicate and fragile; I’ve been warned not to leave them out in the heat. Each looked like a slice of sandwich cheese with a thin paper coating separating the slices of wax.  Within the wax were copper wires to help hold it in the frame.  I have been told, if a frame is over 75% full it will yield a pound of honey so you can imagine with the weight of the comb, these fragile wax sheets need to be carefully installed. 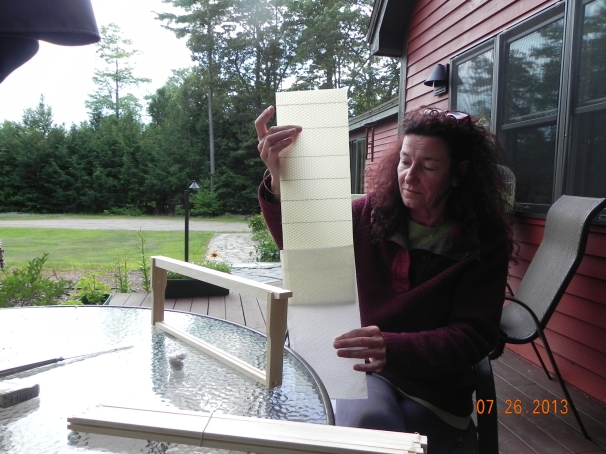 Four metal pins that looked like clothes pins were inserted on the sides to stabilize the wax in the frame.  It took just over an hour, once I got the hang of it, to assemble ten frames. 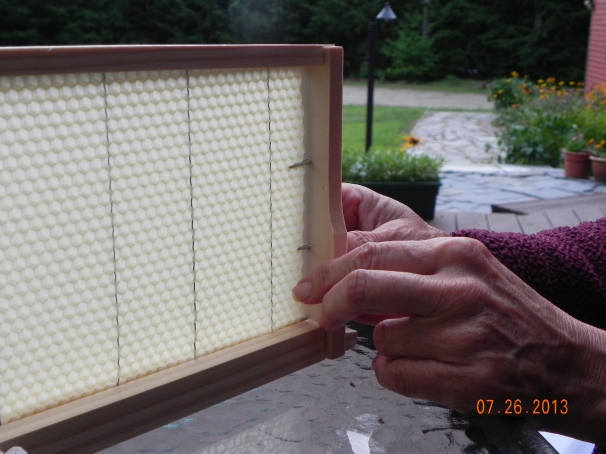 New Super and more sugar syrup in hand, I suited up and lit my smoker.  The bees had filled out several more of the empty plastic frames.  Here you can see capped honey and comb built out on the left.  The lower right is plastic frame that has not been built out with comb yet. 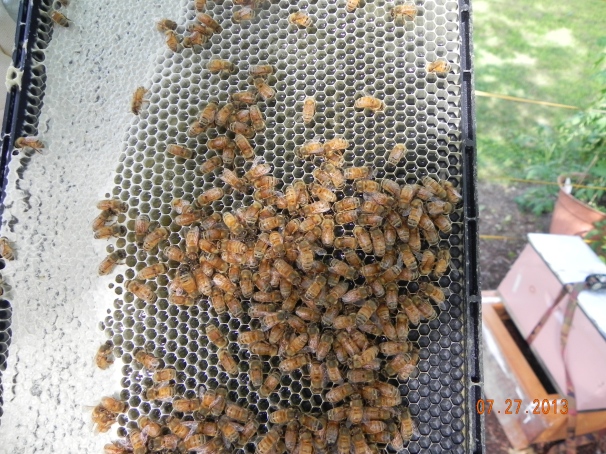 Between the first two boxes and the new Super, I installed a metal grate called a Queen Excluder.  The worker bees can fit through the holes but the larger Queen can not.  This insures that there will be no new brood, only honey in this box.

As I stood over the growing hive and admired the colony, I noticed the pitch of their buzzing song had changed.  It went from low humming to a faster more urgent buzz.  I knew they were getting impatient with me and wanted their home back to normal.  As soon as I slid the sugar syrup feeder on top, the song slowed again to the industrious hum. 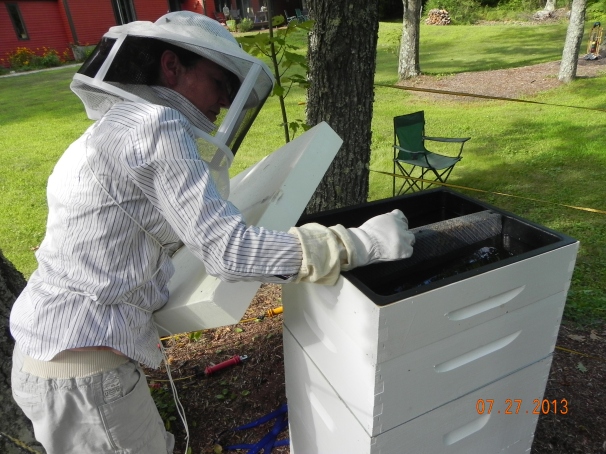