My weekly beekeeping post is chock full this time.  Suddenly, the news is heating up on the plight of bees.  Time Magazine ran a cover story this week calling on the public to wake up to the problems bees are facing. My friend, Barbara, in Texas sent me a clipping from Texas Co-op Power magazine. The article was three pages long with great photos and focused on local beekeepers and how important bees are to agriculture.

The bottom line is that all of this is starting to get attention and that is a good thing for everyone. “Honeybees pollinate 80 percent of all fruit, vegetable and seed crops in the United States, according to the National Honey Board.”

On a personal level, I suited up and spent an hour digging all the way through my humble hive.  If you remember, I purchased the initial hive set up in early June and my bees arrived shortly thereafter. Here‘s that first proud post, Hive’s Alive! 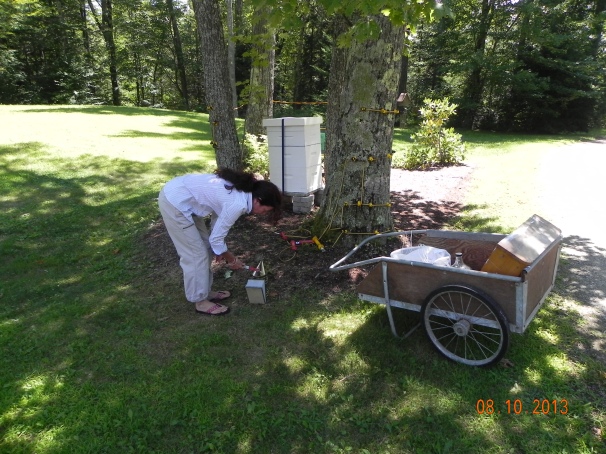 The little single body hive has grown since into four stories of industry – a virtual sky-scraper in my tiny bee yard. The top layer is the feeder.  Bad beekeeper that I am, it was empty. The wooden boxes tend to stick together from the propolis (glue) the bees produce for hive repair. I’ve become very comfortable with my hive tool for things just like this. 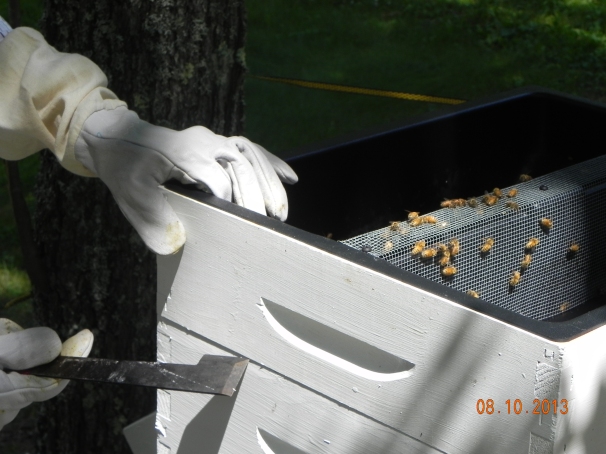 Below the feeder is the Super, or “honey only” box I put on just two weeks ago. It was predictably empty after so short a time. Then I got into the meat of the matter. The top-most box went on in mid-July. It was full of empty frames at that time so I added a built out frame from the original box to encourage the ladies to move up and build out. I carefully removed the first three frames which were empty. The other seven were heavy with comb.  I searched each carefully and though I didn’t find my queen bee, her presence was obvious in the healthy new bees about to emerge.

If you look closely at the lower right hand corner, those white things are bee larva!

The bottom layer contains the oldest part of the hive.  Oddly, again, only seven frames have been built out with comb. I should have shuffled the empty frames closer to the middle to encourage more building, but I hesitate to mess with their choices too much. The nights have been getting chilly and the center of the hive is warmest. I don’t want to compromise what they have done.

Replacing the upper hive body was a challenge.  Even with just seven frames it weighed about 50 pounds and had to be handled carefully.  Guess that’s why the occupational hazard of beekeeping is back-ache!