I am sore from head to toe. I didn’t ride the event today.  I was back in my comfort zone,  groom to a talented young woman I admire. It used to be Han and I who spent too many waking hours trucking, bathing, braiding, and sweating over a horse trial. Now I am invited to accompany Ms. Julia. When Hanni moved to Arcata, CA to attend college and craft a new life, I went to a few events alone for a while, or with a friend from the barn. Life has moved on and Night and I have exchanged our expensive hobby for the joy of companionship on the trails.

The day, did not start out well. I managed a total face-plant in the dewy lawn of Mountain Lane Farm at 7am. Don’t ask. Suffice to say nothing was broken and the bloody nose had abated by the time we stopped for coffee, donuts and gas. That is not something I can or should remove from my nose, so stop staring. It is a scab, the only visible reminder though my “experienced” body is a solid mass of sore muscles.

I was holding a frozen water bottle to my face, reading the GPS on my phone (when we had service) and grooving to the country selection Julia had on the truck CD player. Just the other day, someone told me  I was dating myself calling this genre of music “Country Western” but trust me, nothing goes better with a long drive to an equine event than a cowboy crooning a love song.

Route 89 through New Hampshire and into Vermont is one of America’s most magically scenic highways and many years ago, fresh out of college it was my commute to work every day at Yankee Barn Homes. I was a lowly receptionist/office clerk/gopher, but I had the most mesmerizing ride through the mountains in my old red Saab every day. Driving that same path today caught me in a moment of reflection.

We happily thought we were making good time. The pin on the map said we had arrived. I looked up at the packaged-home, ranch-style house, and the enormous barn crowded with dead motorized vehicles. The gentlemen in the barn set down their beers and tried to call off the two rambunctious golden retrievers who bounded to greeted me as I ran up the driveway. “Hitching Post? No you are on the wrong side of town, not close at all!” I couldn’t tell Julia this, her dressage test was in T-minus 45 minutes and counting.  He gave me the directions twice, two lefts and a right, over the steel bridge after the pizza place.

Off we went, “It’s just down the street!” I happily chimed. Another long, narrow dirt road with deep gullies on each side required us to flag down a vehicle coming the other way. “Well first you have to find a way to turn around…”

We made it with 10 minutes to spare. The “Impossible Red-Headed Mare” stepped of the trailer, cool as a cucumber, and took a look around. “Oh, I’ve got this!  I’m performing!”

I will tell you a little secret, I keep a bucket list. On this list was to one day compete in a sanctioned Horse Trial. I crossed it off years ago but remember the day very clearly that I put it on the list. The day fraught with anxiety, trepidation and fear when I walked my first cross-country course with Hanni.

Julia dragged the Scarlet Midget off the trailer while I ran for her numbered pinny and show packet. With luck, they were running a little behind schedule and she had lots of time to warm up, about 15 minutes from trailer to ring. The warmup areas are always dusty and just a little chaotic.

I fumbled with an unfamiliar camera, trying to record her dressage test. The Chestnut mare did a lovely job of floating through her baby-beginner-first-ever dressage class.

Lady Luck shined on us after dressage, we had two hours before the stadium jumping and cross-country phases. I had brought grilled steak tips, bread and such. We picnicked on the tailgate looking across as the green mountains of VT. Yes, our nails were grimy, yes, we  were dusty and slightly smelly. But it was glorious! The pony happily munched her hay in her private trailer.

Julia walked her cross-country course. It was incredibly hilly, the most challenging I have seen from a footing stand point. The only level ground was the valley below our trailer site.

Finally it was time to take the “Little Red Corvette” out and warm her up. 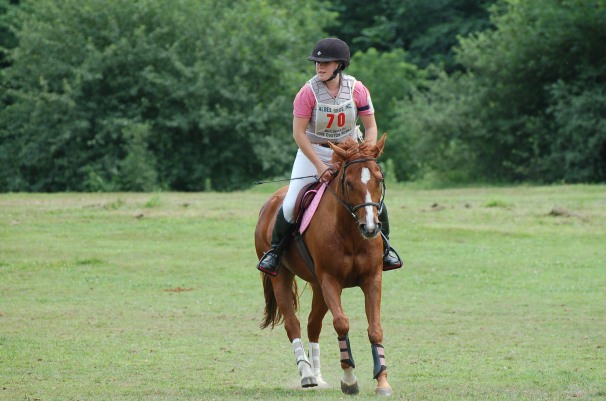 She was a bit sticky, in fact she was down-right taciturn at one point. Then it struck me, she doesn’t like all the other horses warming up, breathing HER air.

The stadium part went well, but that was expected as she came out the world of jumpers. Cross-country was going to be interesting. She had only seen one course, a week ago and the open fields and natural jumps were not familiar fare.

The answer came with the first log. Her ears came up, she scanned the terrain and said, “OH, I’ve got this!!”

The water was interesting. She took her time about it and it cost her a penalty but given her lack of experience, she handled it with grace.

From there she raced up and down the hills with such glee the camera shoot from my laughter.

The ride home was blissfully uneventful (pun intended) and a lot shorter with no wrong turns. It was a long day, but it reminded me to go back, every once in a while to the bucket list.